How To Scale Out of Positions (with an Example)

As a forex trader, one of the key things you need to know how to do is scale out of your positions. This means taking profits at multiple levels as the market moves in your favor. In this blog post, we’ll show you an example of how to scale out of a position, so that you can take profits while still letting your winners run.

When a forex trader wants to scale out of a position, they will first set a target profit level.

When a forex trader decides to scale out of a position, they will often begin by establishing a target profit level. This profit level can vary based on each trader’s individual goals for the trade; for example, some traders may aim for higher profits but be willing to accept smaller returns in exchange for less risk, whereas others may opt for more aggressive strategies with higher potential gains and more risk. Once the target profit level has been set, the trader will then proceed to execute their strategy, gradually exiting the market as they manage their position over time to maximize their overall return.

Once the target profit level is reached, the trader will begin to close out some of their positions.

When trading on the forex market, it is often wise for a trader to scale out of their positions. This means reducing the initial position size once certain profit levels are reached. In terms of managing risk, it is generally considered advantageous to take partial profits as a method of increasing overall gain and limiting potential losses. Focusing in particular on forex trading, once a trader has achieved the desired level of profits they had in mind when they opened the trade, they will begin to close out some of their positions. This behavior can help protect any further gains that have been made and to secure those previously attained. Hence, scaling out of position remains a reliable strategy worthy of consideration by every currency trader.

The number of positions that are closed will depend on how much profit the trader wants to make.

When it comes to scaling out of a position, forex traders can choose just how profitable they want their trades to be. Depending on how much profit the trader wishes to make, they can set the number of positions they plan on closing with their trade. With this tactic, they can diversify the risk while still having control over how much money they make in a given position. By taking into account their trading goals and expectations, traders can easily scale out of a position with confidence and success.

Once the desired amount of profit is made, the trader will then exit all remaining positions.

After reaching the desired amount of profit, a forex trader will close out their remaining positions. To scale out of a position is to close the trade in a series of incrementally decreasing trades, locking in smaller amounts of profit at each successive step. This method provides the trader with the assurance that if market conditions quickly change and reverse their direction, they still have achieved their goal of gaining profit from the position and are no longer exposed to any additional risk. 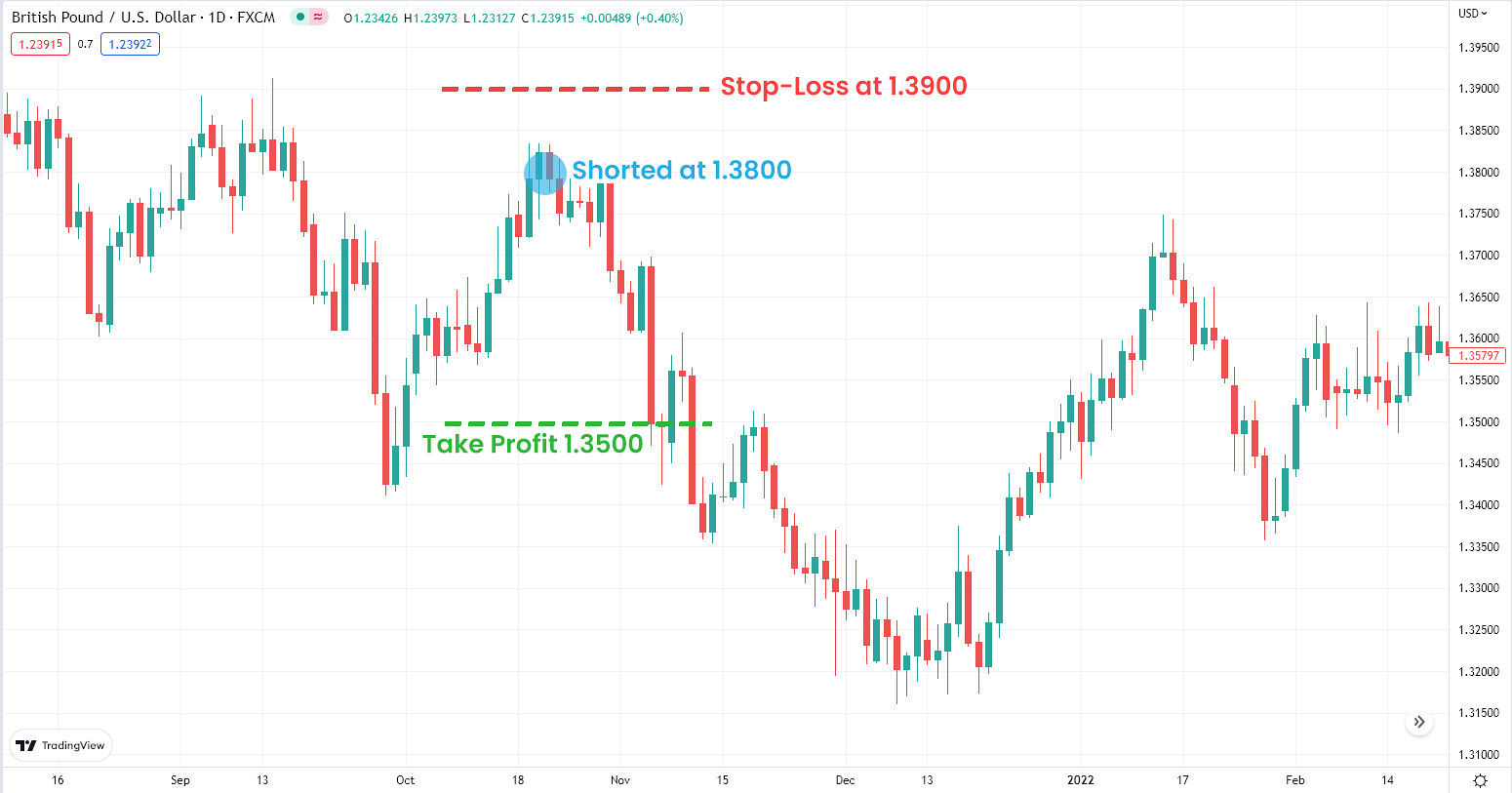 About a week later, GBPUSD price action has moved to the downside to 1.3700 — 100 pips in your favor — for a profit of $100, or a 1% gain. But there’s been some economic news in the U.S. that’s not so good for the dollar. You think that maybe there’s a short-term rise in GBPUSD on the horizon and you want to lock in some profits.

So, you decide to close half of your total position by buying 5K units of GBPUSD at the current price of 1.3700. 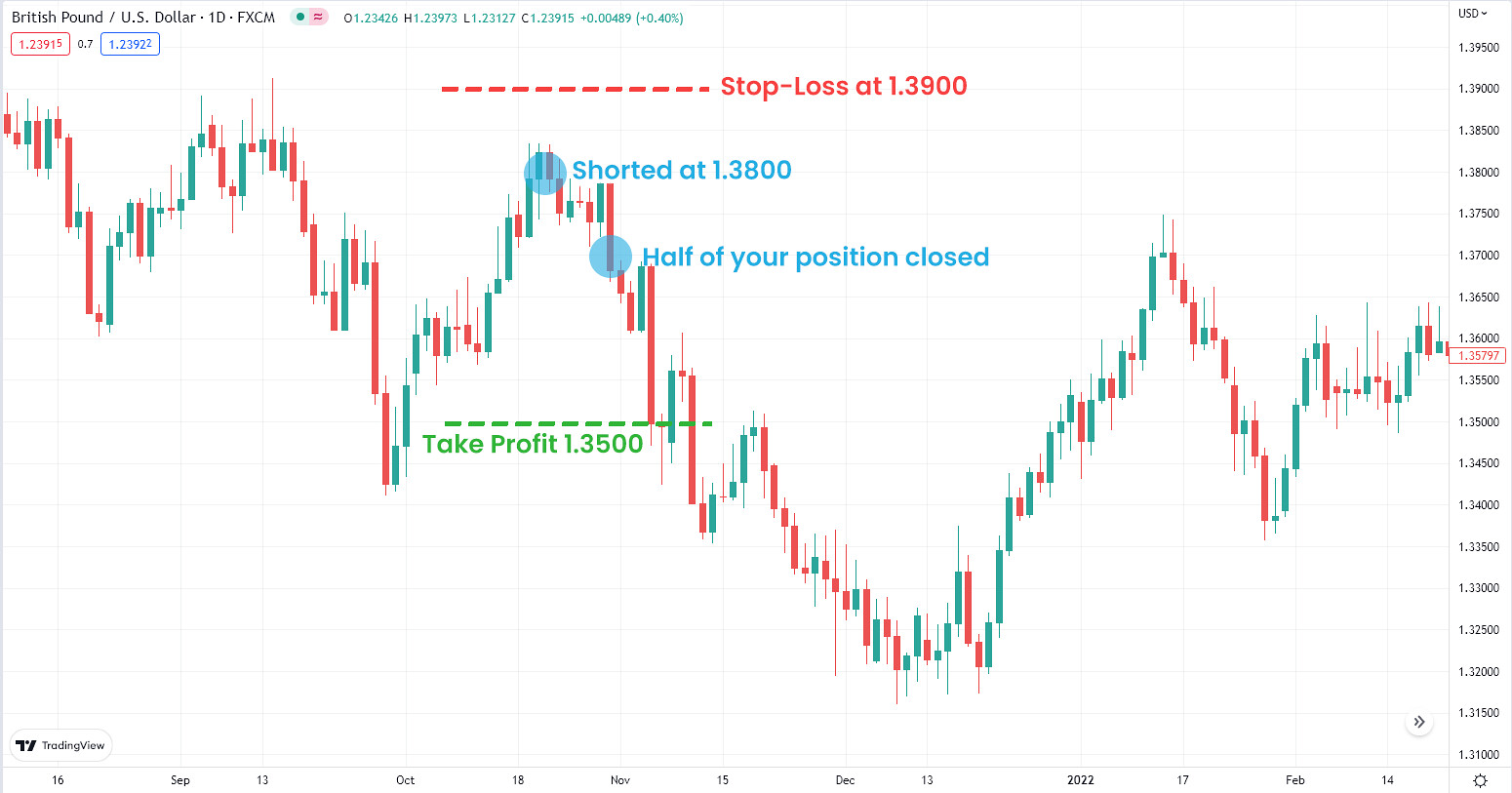 Then you move your stop back to breakeven and your risk on this trade is OFF. If the trade moves higher and triggers your new stop-loss at 1.3800, the remaining position carries no loss. But if it continues lower, you can ride the trade for more profit. 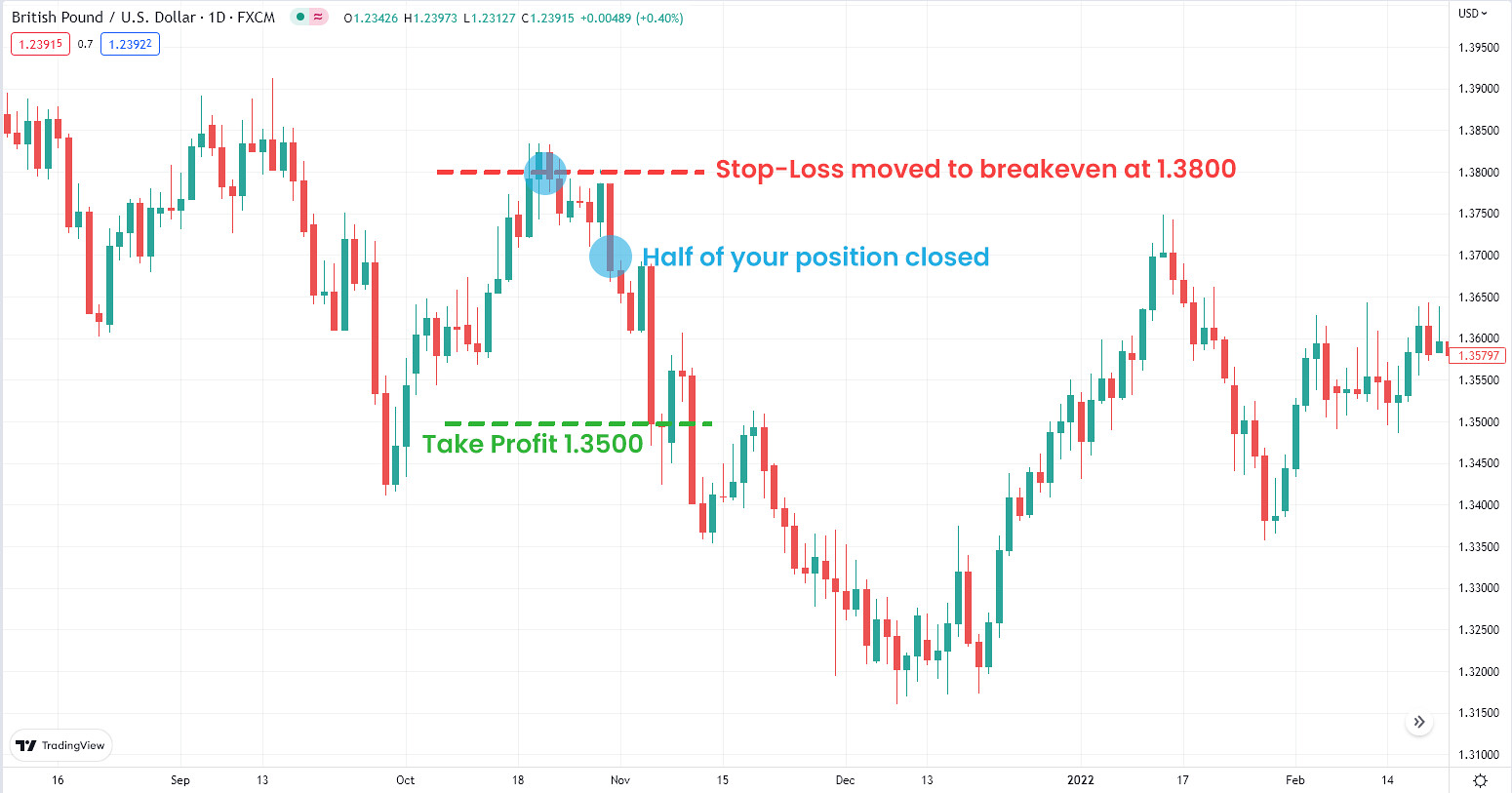 The trade-off is that, by taking half your position off the table, your max profit is decreased.

The price did indeed push lower to your profit target and closed. You made $200 on that trade — $50 from the half you scaled out and then $150 from the other half that you left in the market. Sure, you could have made the whole $300, but you played it safe and scaled out. 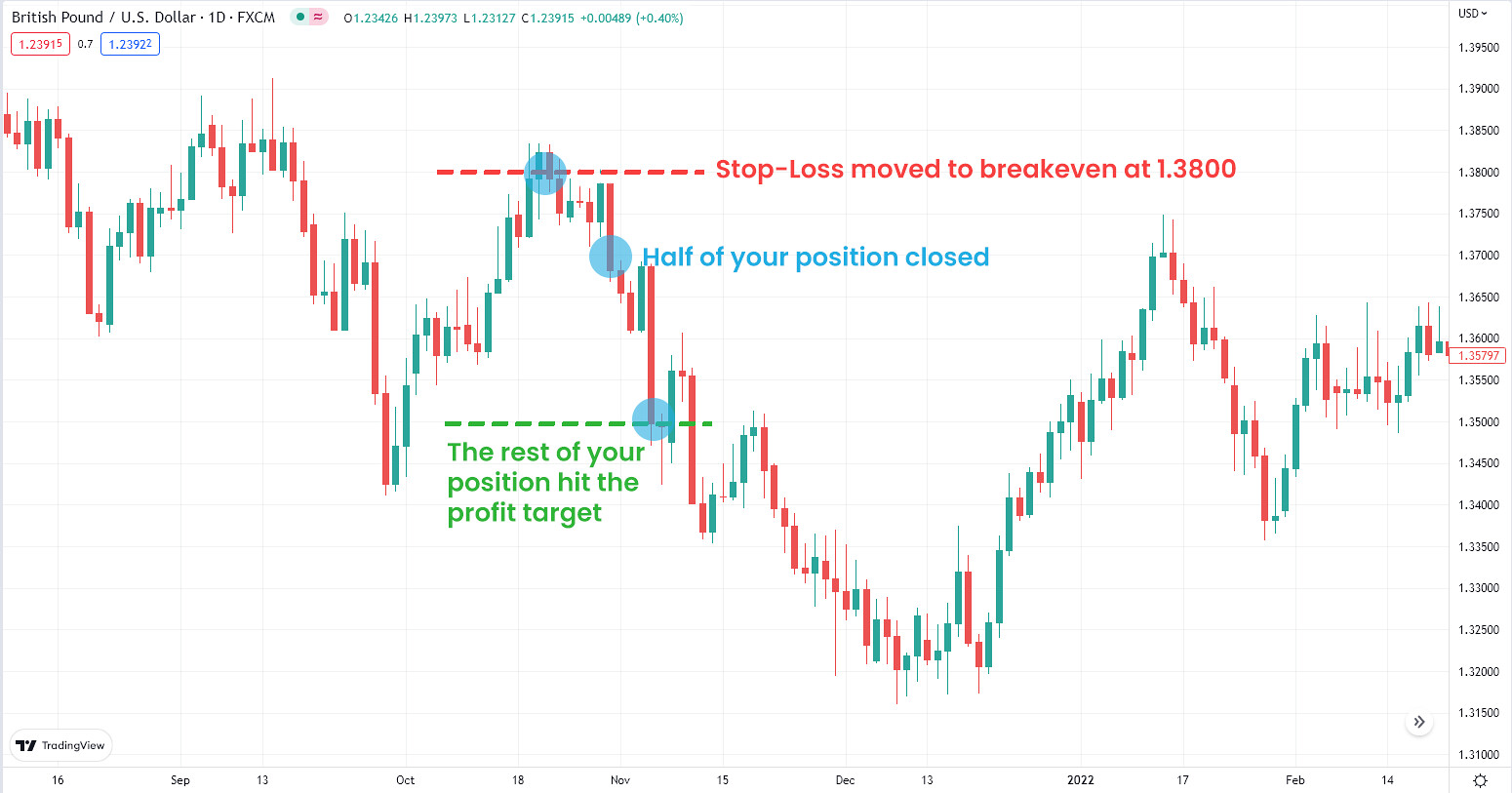 The decision is always yours to make. Do you want bigger profit potential or peace of mind of locked-in profits and a risk-free trade?